At age 10, English born Michel Ray was fluent in both French and German, as well as in English. It's interesting that perhaps his best remembered role is that of a Mexican boy in The Brave One. He won Film Daily's Critics Award for his performance in The Tin Star, and was one of the top ten juvunile performers for 1957. In The Space Children, he co-starred with many of the great child stars of his day. 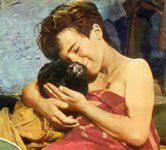